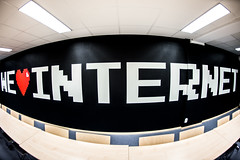 From a couple of years ago, but still very relevant...

Minister of Comms and IT, Amy Adams, opened the second day of NetHui with an overview of the Internet and digital technology in New Zealand. One of the first things Amy said was "the Internet and the Internet economy were successful because they were not led by government", although she didn't seem to unpack that further...but I may have missed something!

One of the key things that Amy mentioned was the fact that the development of UfB and other initiatives are underway, the next stage is to consider how connectivity can continue to be enhanced for the folks outside the UfB footprint - in particular rural and remote areas of New Zealand.

International trade with overseas markets - ICT is the 3rd biggest export of the New Zealand economy. A range of initiatives are now underway to establish and grow the presence of New Zealand expertise and products with international customers.

Internet Governance and net neutrality - all Internet traffic should be treated equitably. Despite the core neutrality principal many countries stray from neutrality by blocking sites, for example, deemed harmful. The telecomms market is evolving, with connections with a data cap of 50GB doubled in the year ending June 13.

Net neutrality is an issue that will be considered by government in the upcoming years, and it is likely to have significant implications of the telecomms sector in New Zealand. Amy sees that this will be a debate that will help develop an understanding of Net neutrality in a New Zealand context.

There is a growing debate around what Internet government should comprise. As the Internet matures there are complex issues to consider such as how our privacy is protected.

Amy recognises that it takes all sectors and a variety of voices to discuss what we want the future to look like.