Sapiens and the Sixth Extinction

My apologies to readers for a long break between postings. However, I have been using my non-posting time to do some serious reading about the relationship between values and some of the major and intensifying issues facing us all in the first half of the 21st century. My quest started while I was in Germany and the UK over winter visiting our five grandchildren of that side of the world. I thoroughly enjoy the privilege of reading the Guardian and the Observer newspapers on a regular basis. The Guardian, in an article by Robert McCrum "The 100 best nonfiction books of all time,"  listed "The Sixth Extinction" by Elizabeth Kolbert number one! High praise indeed. In another article by the Observer Books team "The best brainy book of this decade," "Sapiens" by Yuval Noah Harari was ranked second. I had not read either so that's where I started!

Special note: As this post is a backgrounder for further posts on the values implication of these two sources I have taken the liberty of drawing heavily on the Guardian reviews.  I have basically summarised their reviews of these books to save time and set the scene. You can read the full reviews using the links at the bottom of this post.

In the Sixth Extinction Kolbert spells out the results of her investigations: “One-third of all reef-building corals, a third of all freshwater molluscs, a third of sharks and rays, a quarter of all mammals, a fifth of all reptiles, and a sixth of all birds are headed towards oblivion.” Kolbert’s indictment of humanity is remorseless. She adds that “The losses are occurring all over: in the South Pacific, in the North Atlantic, in the Arctic and in the Sahel, in lakes and on islands, on mountaintops and in valleys.” 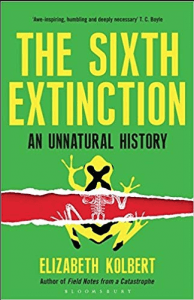 As you read The Sixth Extinction you just can't evade the conclusion that we are on the brink of a great catastrophe, one in which the agent involved is not an inanimate object (such as an asteroid) or a geophysical force (such as the extreme global warming disaster of 250m years ago) but a sentient creature: ourselves. Homo sapiens may have enjoyed brilliant success on Earth but we have done so at the expense of virtually every other species. We are, as the Observer’s Robin McKie has put it, “the neighbours from hell”.

Harari's "Sapiens" has been described as another “epic” broad-brush history in the tradition of H.G. Well's "The Outline of History". Both works review humanity’s origins back more than a million years. Harari's book is eclectic in its scope, its readability, and its author’s willingness to offer ethical judgments.

Harari's main argument is that Sapiens came to dominate the world because it is the only animal that can cooperate flexibly in large numbers. He argues that prehistoric Sapiens were a key cause of the extinction of other human species such as the Neanderthals, along with numerous other megafauna. He further argues that the ability of Sapiens to cooperate in large numbers arises from its unique capacity to believe in things existing purely in the imaginations, such as gods, nations, money and human rights. Harari claims that all large-scale human cooperation systems – including religions, political structures, trade networks and legal institutions – owe their emergence to Sapiens' distinctive cognitive capacity for fiction.[5] Accordingly, Harari reads money as a system of mutual trust and sees political and economic systems as more or less identical to religions. 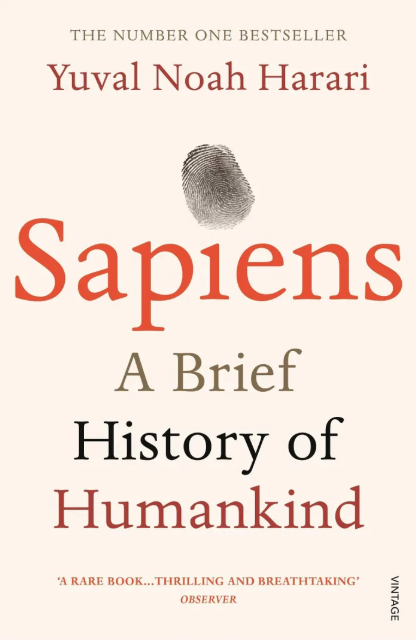 Harari's key claim regarding the Agricultural Revolution is that while it promoted population growth for Sapiens and co-evolving species like wheat and cows, it made the lives of most individuals (and animals) worse than they had been when Sapiens were mostly hunter-gatherers, since their diet and daily lives became significantly less varied. Humans' violent treatment of other animals is indeed a theme that runs throughout the book.

In discussing the unification of humankind, Harari argues that over its history, the trend for Sapiens has increasingly been towards political and economic interdependence. For centuries, the majority of humans have lived in empires, and capitalist globalization is effectively producing one, global empire. Harari argues that money, empires and universal religions are the principal drivers of this process.

Harari sees the Scientific Revolution as founded in an innovation in European thought, whereby elites became willing to admit to and hence to try and remedy their ignorance. He sees this as one driver of early modern European imperialism and of the current convergence of human cultures. Harari also emphasises the lack of research into the history of happiness, positing that people today are not significantly happier than in past eras. He concludes by considering how modern technology may soon end the species as we know it, as it ushers in genetic engineering, immortality and non-organic life. Humans have, in Harari's chosen metaphor, become gods: and they can create species.